As you have already figured out, ratatouille is a French cuisine dish. It means the ‘food that is being stirred’. It’s a common rusting food, also called naff stew. I won’t go into the history details of this dish. I have found many ratatouille recipes online. Finally, I had to come up with my own recipe, as I had to cook it with the ingredients I had at the moment. So, here is my ratatouille recipe: 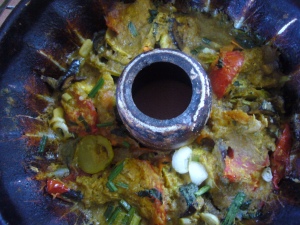 I know, this looks pretty unusual for ratatouille recipe. I just did not have any other stew pan to cook it in.

As you may see, I was out of one of the essential ratatouille ingredients. That is sweet pepper. So, I had to do without it. First, I cut egg plants in half and left them soaking in salty water. Then I boiled chicken broth, added few garlic cloves, few mushrooms, 1 onion and few pieces of chopped carrot. I also added some salt and black pepper. Once the broth got ready, I blended it.

Next, I sliced squashes and egg plants and placed them into a stew pan.

As you may see, I have made pretty thin slices and interlaced egg plant ones with squashes. I have poured in some vegetable oil, added sliced tomatoes and sliced garlic cloves. Then I placed the pan into the oven. I let it stay there for some 20 min for the veggies to get a bit fried up. Then I poured in the broth.

Finally, I added some greens (chopped green onions) on the top and turned the heat down. I have also added some coriander seeds and curcuma to my Ratatouille.